The Evolution and Future of SmartAg 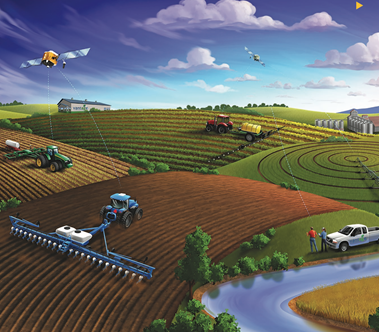 “Agriculture is our wisest pursuit, because it will in the end contribute most to real wealth, good morals and happiness.”
– Thomas Jefferson

Here at Senet we understand the value of agriculture, and how it plays such a vital role in the sustainability of our world, which is why we take so much pride in our role in the “food chain” of smart agriculture by helping to enable agriculture-focused businesses use better data to improve their operations and enhance their results.

The challenges farmers in our country face today may seem daunting, but they certainly aren’t the first. Since the cotton gin (1793) and the cast iron plow (1797) were first introduced in the 1790s to the American farming industry, the United States has led the world in agricultural innovation. According to the USDA, agriculture consistently ranks as the second most productive aspect of the U.S. economy. Farms regularly enjoy record harvests despite facing challenges ranging from severe weather threats, like droughts, to falling prices and downturns in the global economy. U.S. agriculture’s high output is even more impressive considering there is less farmland and fewer farms and farmers today than 100 years ago.

Despite this success, U.S. farmers will face even greater challenges in the coming years. The impacts of climate change caused by rising temperatures—including changing precipitation patterns, increased severity of extreme weather events and reduced availability of water—pose a significant threat to farmers around the globe. At the same time, rapid population growth will require farms to produce 70 percent more food by 2050 than they currently produce in order to feed the growing population, according to the UN.

Since the early days of the industrial revolution through the 20th  century, innovations—like the cotton gin, grain elevator, gas-powered tractor and combine harvester—have helped U.S. farmers adopt more efficient and effective “precision farming” methods that boosted their productivity and profitability. The “Internet of Things farming” or “smart agriculture” holds the same promise in the 21st century for farmers and gives them the tools to meet all of their future challenges head on.

How does “smart agriculture” work? With IoT, low-cost sensors are connected wirelessly over a low-power wide-area network (LPWAN) (or other types of wireless networks) and managed by powerful cloud software that can make farms, machinery and crops interconnected, intelligent and highly productive. Sensors in the field can give farmers detailed maps of both the topography and resources in the area as well as the conditions of the soil, such as acidity and temperature. Farmers can measure and monitor crops extremely closely . . . almost on a plant-by-plant basis. Using real-time satellite images and weather-tracking drones, farmers have greater access to climate forecasts to predict weather patterns in the coming days and weeks.

However, smart farming is not just about boosting agricultural productivity to help farmer “harvest more—better and faster”; it is about applying new “smart agriculture” technologies to new “sustainable farming” techniques that protect the environment, public health, human communities and animal welfare and ensure that farmers can meet the world’s food demands in the coming years.

What are your thoughts about the future of SmartAg? Leave us a comment here, we’d love to hear from you.

You can learn more about our network that enables smart agriculture at senetco.com/network/.