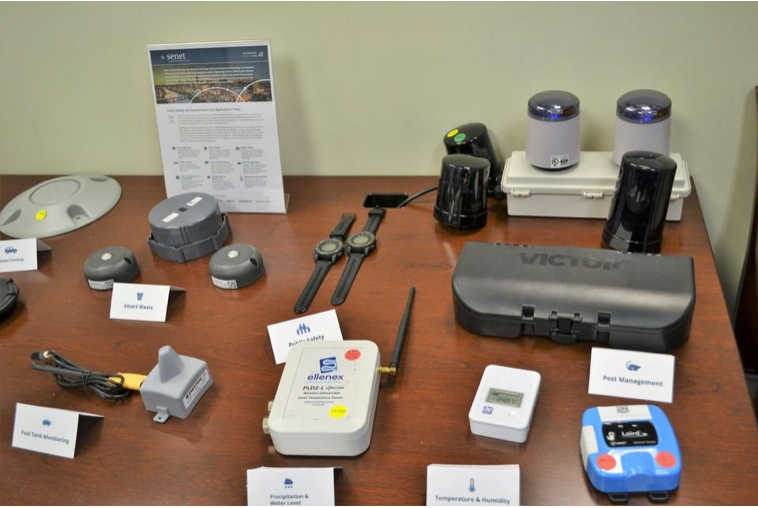 As published by Seacoastonline.com

As Bruce Chatterley looks to the future of the Internet of Things, he sees endless possibilities. And he has a good view, because Chatterley is chief executive officer of Senet, a networking company that is a leader in IoT technology and how it can be used to improve everything from irrigating crops to letting a refuse company know a dumpster needs emptying.

“Once you get a network, it’s limitless in what you can do with it,” said Chatterley, who became CEO of the Portsmouth-based company in July 2017, succeeding George Dannecker, who retired in 2017 after running the company for four years.

IoT is an acronym for the Internet of Things, broadly defined as an interconnection of computing devices embedded in everyday objects, enabling them to send and receive data.

Senet’s role is providing the network that enables these everyday devices, such as an irrigation system on a farm or a propane tank at your home, to send and receive that data. It does so through a cloud-based software and services platforms that enables global connectivity.

“We are honored to have the Senet LVN and our market progress selected for an IoT Global Award, as this underscores our commitment to providing customers with the innovation and value that is needed to deliver on the promise of IoT,” Chatterley said. “The Senet LVN offers a modern approach to deploying and managing IoT connectivity that cannot be matched by traditional cellular models or proprietary technologies. There is a transformation taking place in IoT network connectivity, and the first to market have the most to gain.”

Senet (www.senetco.com) started as EnerTrac Inc. in 2009 in Hudson. It developed a device that used network connectivity to, in a nutshell, tell a propane company when the tank was down to 20% and needed a delivery. No phone calls are required, no counting of degree days. It is used locally by Proulx Oil and Propane and others.

Dannecker took over EnerTrac in 2013, renamed it Senet and took it from a single-application company to a network company built on LoRaWAN. The LoRa Alliance is an open, nonprofit organization dedicated to promoting the interoperability and standardization of LPWAN technologies for IoT.

Senet kept EnerTrac as a product until Chatterley, as the new CEO, sold it December 2017 to the WESROC division of Independent Technologies.

According to Chatterley, Senet offers two products: the public network as a service with Senet’s LoRaWAN network and a managed network, a cloud-based service that enables network operators, such as a cable company, and other connectivity providers to deploy branded LoRaWAN services using their own physical assets, such as a tower.

“We built this product where these network operators like a big cable company would buy and deploy the gateways on assets that they own. So they may own towers, they may own buildings, they may own rights to put things on the wire between telephone poles,” Chatterley said. “They would purchase the gateways, deploy them, acquire the customer, and then through the service we manage the entire thing through the cloud on their behalf.”

In practical everyday uses, it means a low-powered device in an object signals over Senet’s network when something needs to be done or is being done. Senet doesn’t make or provide the object, but partners with a device maker to provide the network for the connectivity that the object needs.

Smart agriculture is one example. It is partnered with Sensoterra, out of Amsterdam in the Netherlands, which provides sensors for farmers.

“This is literally a stake that goes in the ground that you pound in and it does soil moisture sensing, sunlight. Some of these will do soil composition tracking,” Chatterley said. “We’re doing those installations all over the world.”

“When it’s in the warehouse it’ll take its initial reading of temperature, humidity location, time stamp. And then when it’s in transit it’ll continue to track all that data,” Chatterley said. “Then, when they get within a couple miles of the Safeway or the Costco it wakes up, and it tells them: Hey I’m coming, get someone to the loading dock. And then when it gets the loading dock it uploads all the data from transit, and it timestamps the arrival.”

A similar kind of sensor can be installed on a dumpster to tell a refuse company when it is full enough for emptying.

As each new component (smart agriculture, smart gas metering, smart distribution, and so on) is added, the size and ability of the network continues to grow and grow.

“Forward-thinking cities have come to recognize that to realize the full value of IoT, they must deploy a secure and scalable network that supports multiple solutions and applications,” Chatterley said. “Connecting municipalities with the robust networks deployed for water metering could mean a huge leap forward in the delivery of many connected city services.”

According to Chatterley, water metering is one of the fastest growing LoRaWAN market segments, with millions of meters being deployed globally. As municipalities expand their initiatives to deliver city-wide IoT services, they are in a unique position to partner with utility companies to leverage the expansive and dense networks used for metering.

Chatterley said he comes from an entrepreneurial background, recruited to assume the CEO job with Dannecker’s retirement.

In taking the job, he was struck by the potential of the technology and how much more Senet could be doing, and he was impressed by the knowledge of the Senet employees, numbering about 30 at its location at 100 Market St. in downtown Portsmouth.

“I came in as an outside person, kind of looking above the fray, so I brought an outsider’s perspective to the problem,” Chatterley said. “I’ve been in a wide variety of different industries and, and that experiences helped me really think through business models here because we cross a lot of those different businesses.

“The second thing was, I met the team here, and the executives and the broader team is second to none. Our chief technology officer is one of the top, if not the top, minds in this technology in the world. “He has been a leader in setting the standards for LoRaWAN, which is the technology that we operate on, and is literally recognized as one of the top minds in globe in this space. And beyond that, there’s a wide variety of skill sets here that are hard to find in one place.”

IoT technology, said Chatterley, could be in billions of devices in the years ahead.

“Fast forward five years from now I think what’s going to happen is, every day, your everyday life will be instrumented and you won’t even think about it,” he said. “You won’t even know about it. You just know things are operating really a lot better.

“The sky’s the limit, and I’m not saying we’re going to be the only network provider connecting those, but we expect to be a major player and our strategy is really to in North America and dominate our home market and opportunistically expand.”