The following is a blog post originally published on Inside Out: Semtech’s Corporate Blog

The metropolitan region in Southeastern Virginia called “Hampton Roads” is prone to flooding. The area is home to two million citizens and 14 military installations, including Langley Air Force Base and Naval Station in Norfolk, the largest naval complex in the world. Like many of the 665 coastal communities in the U.S., this region regularly floods during moderate to heavy rains and high tides. Hampton Roads has the additional burden of experiencing land subsidence – the ground is sinking as sea level water is rising.

Recurrent flooding leaves neighborhood roads with standing water and stalled vehicles. The Director of IT development for the City of Norfolk approached Jim Gray, an electrical and systems engineer, at a local Makerspace about the city’s chronic flooding problem. What started as an innovative pilot project to keep the city apprised of how high the waters were getting and which roads were impassable is now Green Stream Technologies, which leverages Semtech’s LoRa devices and wireless radio frequency technology (LoRa Technology).

Green Stream Technologies is an environmental technologies company. The business helps to create smarter, safer, more resilient communities with the power of Internet of Things (IoT) technology and data analytics.

The Green Stream Technologies’ flood sensors are autonomous, requiring no external power or wired network connection. Each sensor is a self-contained, weather-proof, solar- powered unit that comes with a universal mounting bracket and extension arm. They are small enough to be installed on top of crosswalks, light or electric poles and bridges. The rugged devices are positioned above a body of water or over dry land. 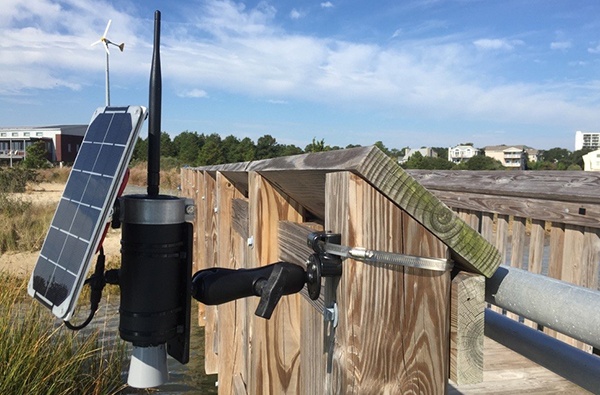 When Green Stream Technologies looked at connectivity options, Wi-Fi did not provide the range needed and cell technology was not practical due to its battery consumption requirements. LoRa Technology was the preferred choice for its long-range, low- power capabilities and small footprint. Senet, a contributing member of LoRa Alliance™, provides LoRaWAN-based network connectivity.

After a series of product prototyping, refinement and calibration testing, the first Green Stream Technologies’ deployment occurred in the City of Norfolk in April 2017, specifically in the Ghent neighborhood and around the Hague Footbridge. Deployments in Virginia Beach and numerous communities in North Carolina soon followed.

The company is expanding beyond Hampton Roads and coastal communities into U.S. inland communities around the Missouri River basin and into parts of the globe where Senet has deployed its network infrastructure.

Green Stream Technologies is working with sea-level rise experts at Old Dominion University’s Department of Ocean, Earth & Atmospheric Sciences to establish a standard model for deployment in new areas – determining how many LoRa-enabled sensors are needed and where should they be placed. Green Stream Technologies also is working on a predictive analytics model utilizing ground water saturation sensors and hyper-local weather data to quickly tell what will happen before flooding occurs.